NEO Development: How to set up an NEO Private Net

Use Private Net for development

As a developer, it would be a good idea to run an NEO private-net on your own machine. Deploying you smart contracts on the test-net should be the final step of your development(before publishing on the main-net), so all the development, testing and debugging should be done on your own private-net. Today I'm here to show you how to easily set up an NEO private net using docker, python on Ubuntu Linux

Step 1: Clone the Docker Image provided by City of Zion

City of Zion is an independent group of open source developers, designers and translators formed to support the NEO BlockChain, they have built the docker image of a pre-build private network, with a wallet file storing all the 100 million NEO, which we will use later.
It's much easier for people to set up a private Net with the docker image, basically, all we have to do is clone it and then run the image on our local machine.

Simply run the docker image with the following command:

After running the image, you should be able to see the image status with command:

Yay! Now the Neo Private net is up and running on our machine. Next, we will try to use neo-python to interact with the private net.

First of all, we need to make sure we have python3.6, also install some required packages:

(Recommanded)Make a virtual environment with python3.6

For more detail about setting up python neo, you can visit their GitHub Readme

Step 4: Use neo-python to connect to the private net:

Open the CLI connected to the private-net

The -p parameter means private net, you can use prompt.py to interact with main-net or test-net as well.
After entering this command, you should see a CLI opened. 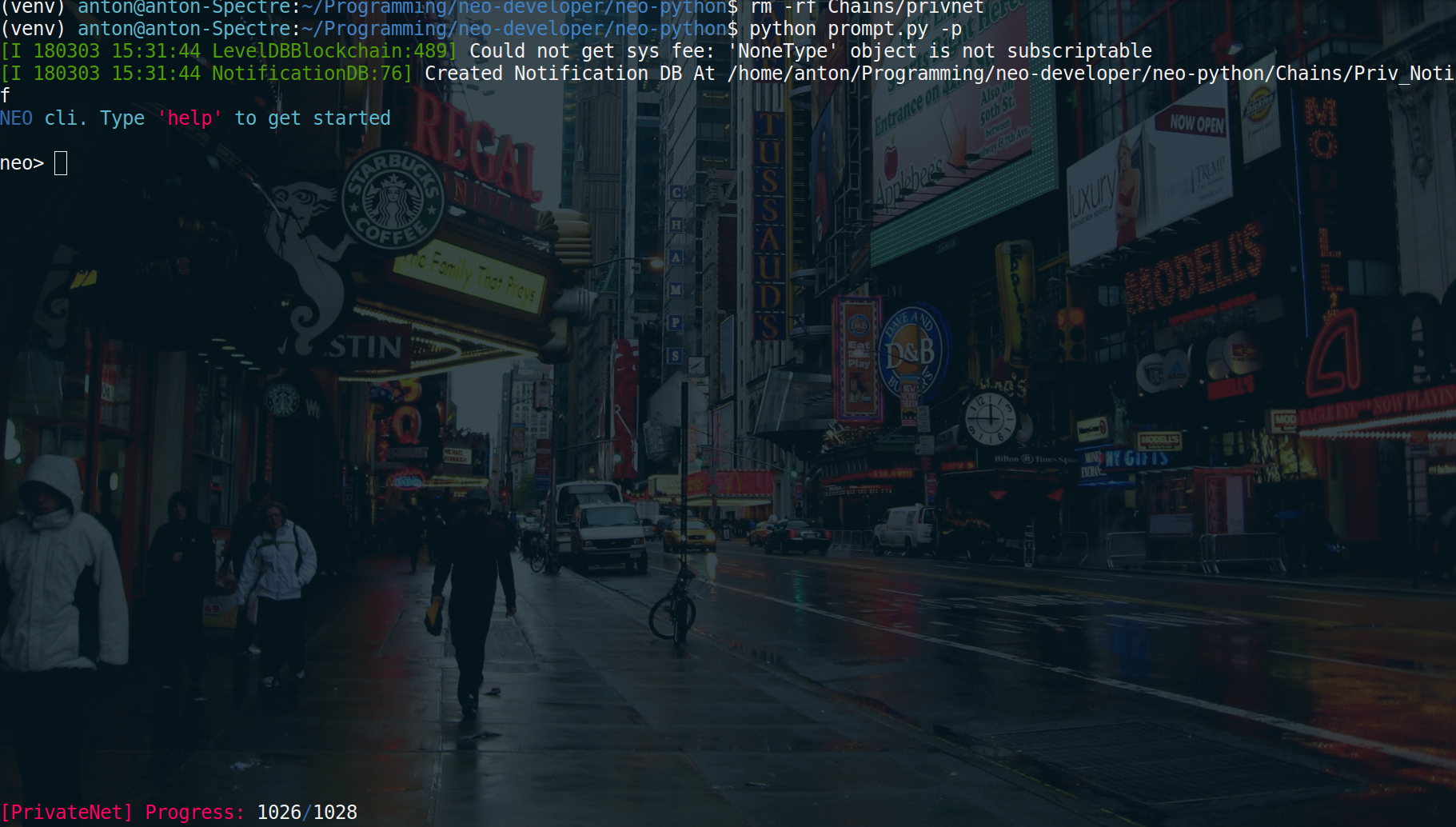 Step 5: Download the wallet file and get your 100 million NEO!

Download the wallet and save it under the neo-python directory: https://s3.amazonaws.com/neo-experiments/neo-privnet.wallet

In the CLI, command:

open wallet neo-privnet.wallet
and then enter the password: coz (for City Of Zion)
You can enter wallet again to see basic information about this wallet. You should be able to see the 100000000 NEO under [synced_balance] Now you have a NEO private-net running with a wallet containning all the assets on this blockchain! We're so rich right now! can start our development :)

I'm still playing around with NEO contract development, once I got something I'll share it on here on Steemit too:)

Hope you all have a lovely weekend, Happy Hacking!

Anton Cheng
Develop a passion for learning. If you do, you will never cease to grow. — Anthony J. D’Angelo